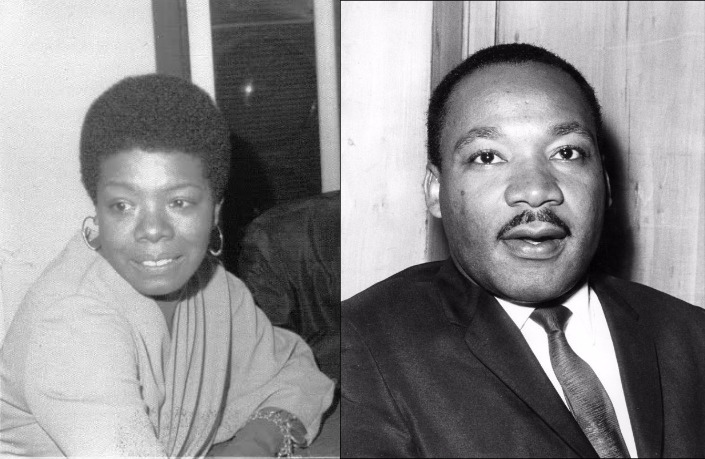 On this day, we honor Martin Luther King Jr. who was born on January 15, 1929 and died on April 4, 1968. Our Matriarch was born on April 4, 1928. These contemporaries met in New York in 1960 after Maya Angelou was moved by one of King’s speeches in Harlem. Along with comedian Godfrey Cambridge, they created the play Cabaret for Freedom. Proceeds from the play were given to the Southern Christian Leadership Conference, (SCLC). Maya Angelou would later work for King as the Northern Coordinator for SCLC. She once said Martin Luther King Jr., reminded her of her beloved brother, Bailey, “small, beautiful speaking voice,” and that when King sat down in her office, she “became a little girl again.” Maya Angelou continued to be a close “sister friend” to Coretta Scott King until Coretta Scott King’s death on January 30, 2006.

“At one point, it was my blessing to work for equality as the Northern Coordinator of the Southern Christian Leadership Conference.  I represented Dr. Martin Luther King Jr.  His words influenced many ministers to take to their pulpits and encourage their parishioners to seek for freedom. They asked their community and their church members to think about freedom as something they deserved.

Maya Angelou would comment on Dr. King’s sense of humor, his ability to tell jokes and his love for all people. On Feb. 4, 1968, two months before he was assassinated, Martin Luther King Jr. delivered a sermon at Atlanta’s Ebenezer Baptist Church and said these words could be said upon his death by people reflecting on his life.

“If you want to say that I was a drum major, say that I was a drum major for justice,” King told the congregation. “Say that I was a drum major for peace. I was a drum major for righteousness. And all of the other shallow things will not matter.” Designers of the Martin Luther King Jr. Memorial in Washington, DC edited the line and inscribed these words on the statute:  I was a drum major for justice, peace and righteousness. Our Matriarch publicly disagreed with the inscription saying, “The quote makes Dr. Martin Luther King look like an arrogant twit. He was anything but that. He was far too profound a man for that four-letter word to apply. He had no arrogance at all. He had a humility that comes from deep inside. The ‘if’ clause that is left out is salient. Leaving it out changes the meaning completely.” Adding, the paraphrase “minimizes the man. It makes him seem less than the humanitarian he was… It makes him seem an egotist… He would never have said that of himself. He said ‘you’ might say it.”  We believe that because of her love of words and Dr. King, our Matriarch was unrelenting in that King be remembered within his character on such an important monument. She continued to say that the quote should be changed, and several months later, the quote was removed.